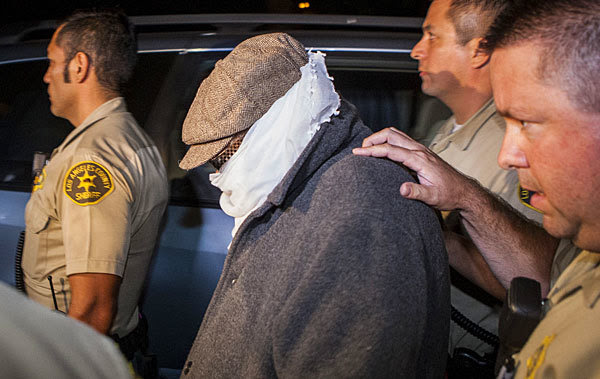 The California man believed to be the maker of an anti-Islam film that ignited a firestorm in the Muslim world was cooperative when authorities escorted him to a voluntary interview, officials said Saturday.

"It was all choreographed," said Steve Whitmore of the Los Angeles County Sheriff's Department. "He was ready and willing and very cooperative."The overnight meeting
with a probation officer came a day after federal officials said they were reviewing the probation of Nakoula Basseley Nakoula, who was convicted of bank fraud in 2010
and placed on supervised probation for five years.

"Innocence of Muslims."Whitmore told CNN that Nakoula left the local sheriff's
station after the federal officials were done interviewing him."He is gone and he
is free," he said of Nakoula, who was bundled up in a coat, hat and white scarf
as he was escorted from his house. Nakoula decided to cover himself, Whitmore
told CNN affiliate KCAL/KCBS.

Whitmore earlier dismissed reports that Nakoula had been arrested, saying he was

never in handcuffs or in custody.Karen Redmond, a spokeswoman for the Administrative Office of the U.S. Courts, said Friday that Nakoula's federal probation was under review.
Redmond didn't provide details of why or when the probation review was initiated,
or how long the process would take.While on probation, Nakoula can't access
computers or any device that can access the Internet without approval from his
probation officer.


Nakoula served one year in federal prison at Lompoc, California, but officials couldn't immediately determine whether Nakoula paid any of the court-ordered restitution of $794,700, according to probation department officials and court records.


Since notice of the film spread through YouTube, Nakoula has been out of public view
and ensconced with his family in their home in Cerritos, California, where journalists
have been gathered seeking information about his elusive background. Cerritos is
about a 20-mile drive southeast of downtown Los Angeles.

The movie, backed by hardcore anti-Islam groups in the United States, is a

low-budget project that was ignored in the United States when trailers were posted
on YouTube in July. But after Egyptian television aired certain segments, violent protests erupted in Egypt, Yemen, Tunisia, Morocco, Sudan, Iran, Iraq, Israel and the Palestinian territories.Violent mobs attacked the U.S. Consulate in the Libyan city of Benghazi,
leaving the ambassador and three other American men dead.

The amateurish film portrays the Prophet Mohammed as a womanizer, buffoon,

ruthless killer and child molester. Islam categorically forbids any depictions of Mohammed, and blasphemy is an incendiary taboo in the Muslim world.The FBI contacted the
filmmaker this week because of the potential for threats but he is not under
investigation, a federal law enforcement official told CNN Thursday.

When news of his movie first broke, the filmmaker identified himself as Sam Bacile

and told the Wall Street Journal that he was a 52-year-old Israeli-American real estate developer from California. He said Jewish donors had financed his film.But Israel's
Foreign Ministry said there was no record of a Sam Bacile with Israeli citizenship.

A production staff member who worked on the film in its initial stages told CNN that an entirely different name was filed on the paperwork for the Screen Actors Guild: Abenob Nakoula Bassely. A public records search showed an Abanob B. Nakoula residing at the same address as Nakoula Basseley Nakoula.


He believed the filmmaker was a Coptic Christian and when the two spoke on the
phone during production, the filmmaker said he was in Alexandria, Egypt, raising money
for the film.

In Egypt, tension has emerged in recent decades between Muslims and the minority Copts.Another staffer who worked on the film said he knew the producer as Sam Bassil. That's how he signed a personal check to pay staff.

When CNN inquired about Sam Bassil, the U.S. Attorney's Office sent a copy of a 2009 indictment. Those court documents showed the bank fraud conviction for Nakoula

In his interview with the Wall Street Journal, the filmmaker characterized his movie as "a political effort to call attention to the hypocrisies of Islam.""Islam is a cancer," he said. "The movie is a political movie. It's not a religious movie."

Source: CNN.COM
Posted by Binti Wa Kiislamu at 8:34 AM