Sha'aban is the month before Ramadhan and is also the month that the prophet fasted the most, that's excluding Ramadhan of cause. So Ramadhan is right around the corner, have you paid up for the days you missed on Ramadhan 2013?


I leave you with this little enlightenment.

Posted by Binti Wa Kiislamu at 9:09 AM No comments: 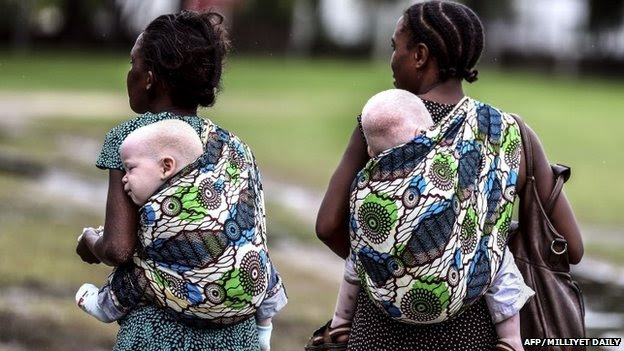 (Look at those sweet babies)

Two witch doctors in Tanzania have been arrested after a woman with albinism was hacked to death, police say.

One of her legs and several fingers were removed in the attack on Tuesday.
Albinos have suffered widespread persecution in Tanzania, where witch doctors say magic potions made with albino body parts can bring good luck.
Such killings have declined in recent years, but this latest attack has prompted a human rights group to call for all witch doctors to be banned.
At a press conference on Wednesday, the group, Under The Same Sun said the current regulation of witch doctors was clearly not working.
The BBC's Leonard Mubali in Dar es Salaam says that currently all witch doctors have to apply for a certificate from the ministry of health and welfare to practise.... Read the rest here...>>>

Its sad that this is still happening, although, I believe the current regulation is working. I don't like the term witch doctors used here, because most of these so called witch doctors are called in Swahili "Mganga wa kienyeji" which means a local (traditional) doctor. Granted Many of these traditional doctors have the knowledge of using witch craft, or are Shamans if you want to call them that, but the fact remains that they are also traditional healers. They use roots and herbal remedies in its original natural forms to cure diseases, reduce fever and etc. For example, there used to be a traditional healer in Dar-Es-Salaam that claimed to cure Diabetes and her customers would swear by her, her rules however, were you stop drinking alcohol, minor dietary changes and her herbal tonics(temporarily) and you were off your meds before you knew it.

What most foreigners fail to understand is that many remote villages depend on these traditional healers as their nearest access to any hospital or clinic you can think off, so banning them is completely off the question. I think what the government needs to work on, are catching the ones that are not registered, and send out their representatives to investigate these establishments before registering them. They also need to do more public campaigns to educate the locals carefully, our Religious leaders will also need to be more involved in this matter. What you don't want happening is having villagers attacking innocent old women cause of suspecting them to be witches.


May Allah guide us and protect these beautiful souls.

Review an older post I had about Witchcraft in East Africa here>>>>>.
Posted by Binti Wa Kiislamu at 6:50 AM No comments:

We are 60 days..ish till Ramadhan. Yipeeeee!!
So we are starting the month of Rajab, which is the July or the 7th month on the islamic calendar.

"O Allah, make the months of Rajab and Sha'ban blessed for us, and let us reach the month of Ramadhan (i.e. prolong our life up to Ramadan, so that we may benefit from its merits and blessings)."

Posted by Binti Wa Kiislamu at 8:08 PM No comments:

Posted by Binti Wa Kiislamu at 8:59 AM No comments: