It is that time of year again, where Muslims go to Hajj. Hajj, is the Islamic pilgrimage in Mecca, Saudi Arabia and is the fifth Pillar of Islam. It is required for every Muslim who is able-bodied and can afford to do so, to go to Hajj at least once in their lifetime. It usually occurs from the 8th to the 12th day of the month of Dhu al-Hijjah, which is the 12th and last month of the islamic calendar. Since the islamic calendar follows the lunar calendar, it falls eleven days shorter than the Gregorian calender. This year Hajj falls in October from the 24th to the 29th. Ihram is the name given to the special spiritual state in which Muslims live while on the pilgrimage.

Tanzania like a few other countries, has a government program where they send 150 people to Hajj every year for free, only for those who can't afford it. The pilgrimage is performed in Mecca and Masjid Alharam which is the first mosque to be built in Mecca is the main mosque used for prayers for the duration of their stay. It was originally built by Prophet Ibrahim and his son Ismail,. The prophet Mohammed(SAW) revived its original purity, by breaking all the Idols that were housed during the pre-islamic time, and commanded the mosque to be a place of worship to Allah alone and not idols. 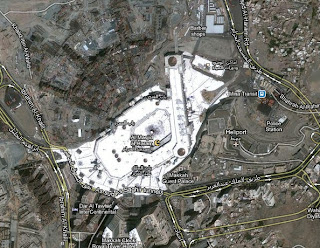 I pray for a safe journey to all our Muslim brothers and sisters who are going to Hajj this year.
May Allah guide you all and accept your prayers

Posted by Binti Wa Kiislamu at 6:42 AM